The other day, I realized that none of my tables in my living room match each other. But, I also realized that I LOVE my living room. Now don't get me wrong, there are things I still want to change, but having a second daughter in college kinda cramps the spending style, ya know what I mean?
I think one of the things I really like is that my room breaks from tradition-
1. The couch- I have a loveseat.
2. The fireplace- it's covered up with the loveseat.
3. The tables- none of them match.
4. The upholstery- my yellow chairs are old and they're fairly dirty. I need to clean them.
5. The carpet- the fact that I have carpet is old school, but alas, I can't afford new flooring right now, either.
6. The paint- it's semi-gloss. Yups. I LOVE semi-gloss on my walls. The friend who painted for me questioned my choice, but I wouldn't budge. I really like the sheen and how it reflects the light. And, don't EVEN talk to me about flat paint. ICK!
Here is the view of my living room when you walk in from the foy-A, as the fancy people say.
If I could paint that dark hole of a piano, I would, but HubbyDoc has put his foot down about that, although, I did think to put a piece of foam board on the flat part of the front where the music sits. But, that will be another project for later. 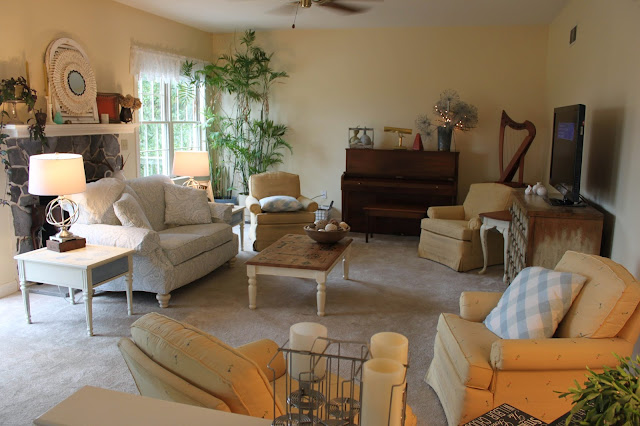 My originally designed coffee table, which I have grown to love more and more. It was originally a $25 unfinished piece, procured off of Craigslist. The butter bowl and paddle were my Grandma's, and I bought the balls at Burlington Coat Factory for cheap (I think about $20). The glittered pumpkins were old, plastic orange ones that I changed up. 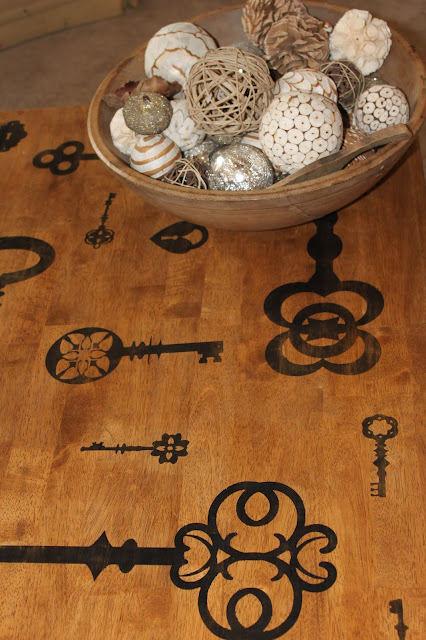 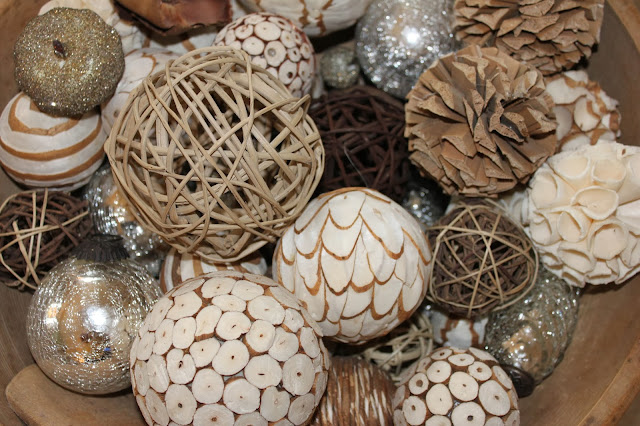 This is my newly designed mantle. The wreath was made by Moi, and I mounted it on a fake vent cover that I salvaged from my house when it was re-sided. When I told the construction guy I wanted it, he looked at me weirdly, but boy, would he be envious if he saw it now!
See how I made this wreath here.
The orange press on the right of the wreath was a very interesting find at a yard sale for about $2. I felt like that was a major score, not so much because I thought it was valuable, but because I thought it gave some visual interest- color and texture. 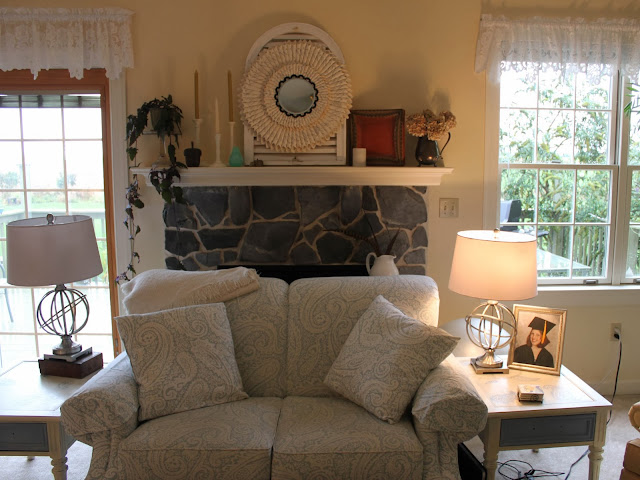 
I procured the end tables from Craigslist again. My 76 yr. old mother went with me (never go alone), and she carried a ball-peen hammer with her, just in case she needed to fend off a Craigslist killer. The trip was uneventful, except that I bought these very sturdy beauties for only $60. I found some paisley designs online, and I used them for a very cool painted finish. 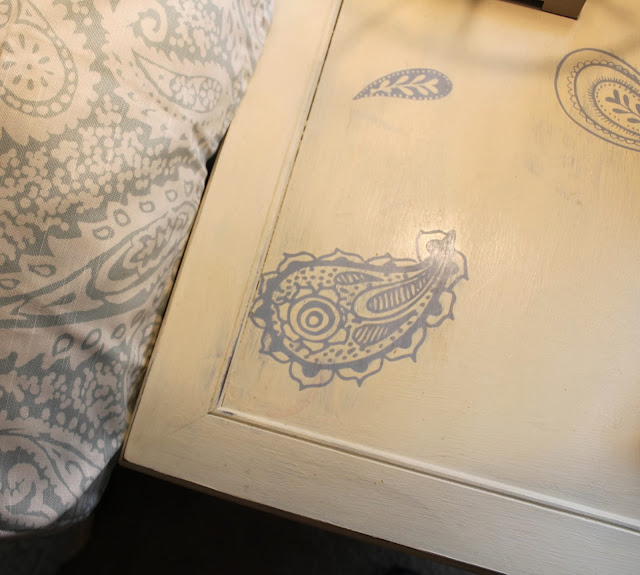 Lamps were from Homegoods for about $40 a piece or so. I'm tempted to put some burlap flowers on the shades, but I'll hold off. 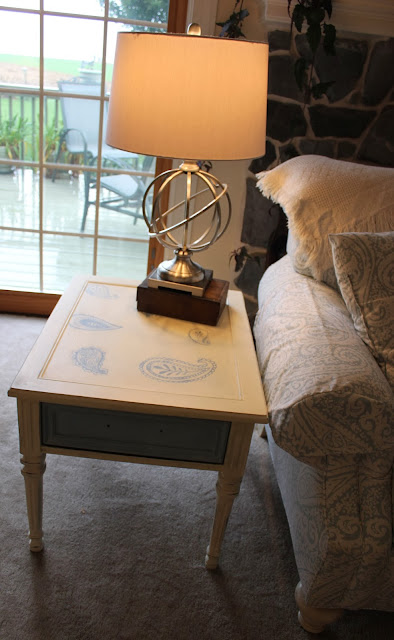 My giant alliums were dried and sprayed metallic silver. They're a little wonky in their galvanized bucket that was about $3 or so at a yard sale. I'll fix them later. The table in the corner is holding my Celtic harp (no, I haven't played in a while), and I'm surprised that the table has lasted as long as it has without paint, but its days are numbered. 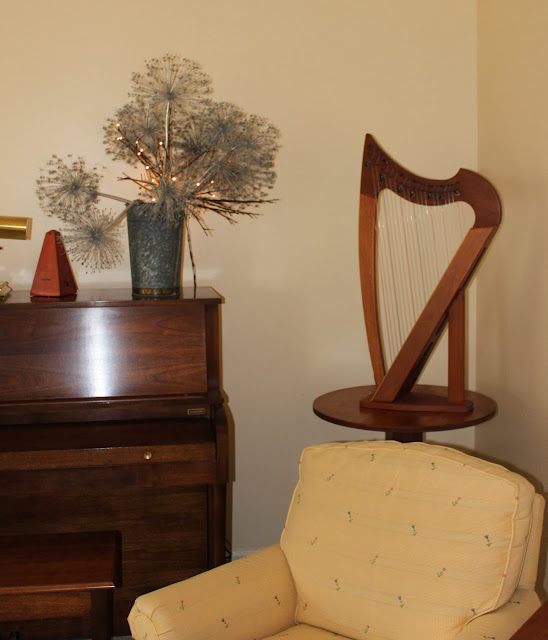 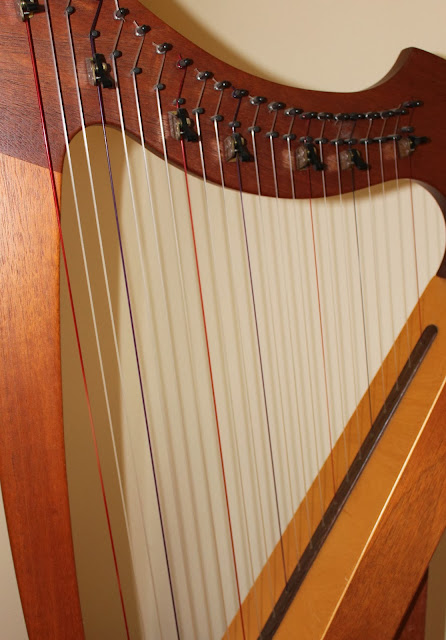 I love little vignettes. The little iron was my Grandmother's toy iron, and I just saw one like it on Etsy, dated the late 1800's. I used a tissue tape transfer on the candle, which is battery operated. I like a combo of battery ones (I don't have to worry about them torching up my dried flower arrangements), and real flames. 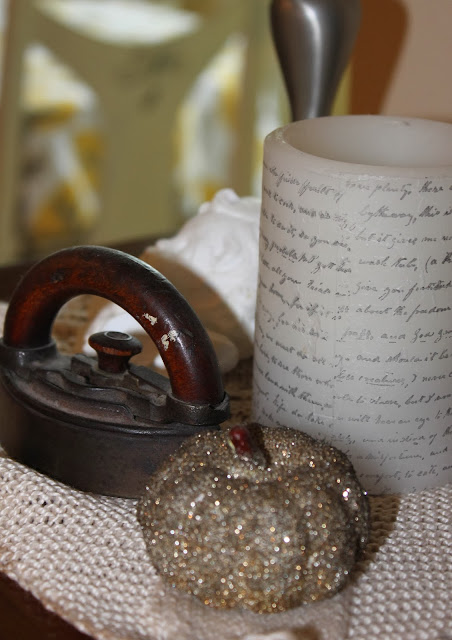 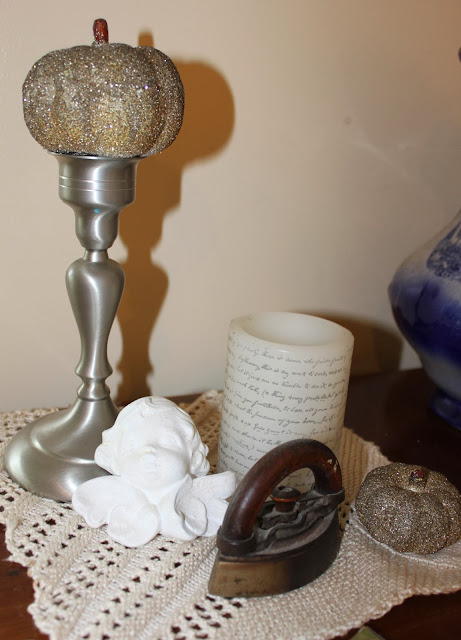 My little telephone table, which I painted with lots of places and events from my current town. This is one of my favorite projects, but I do say that about most of them.
The lamp was $22. The base was $5, and I bought the frilly lampshade from TJMaxx for $17. 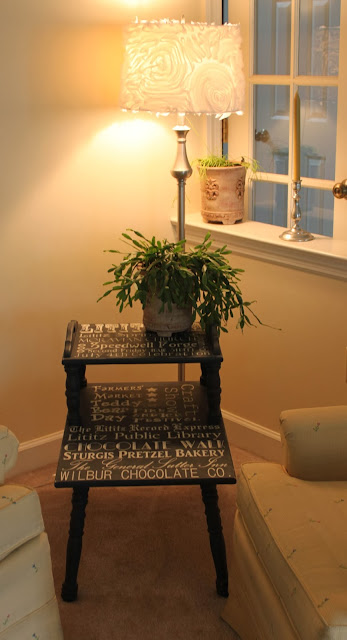 My gourds, which were $1 a piece at a yard sale, in my berry basket, which was just a few bucks. 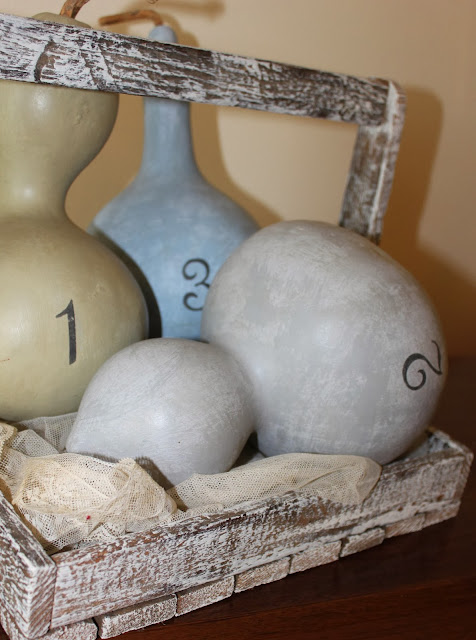 And, a close-up of my alliums. 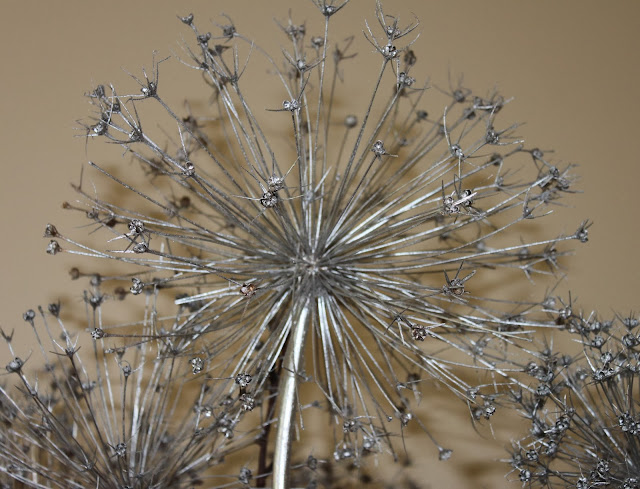 I think I love my living room also because I feel like I robbed the bank.
I love decorating from yard sale finds, but I would make a BIG suggestion. Please, please, please be careful when you're buying used upholstered furniture.
We have friends who "contracted" bedbugs. They spent a few thousand dollars to get rid of them, so I would suggest not even taking the chance. It's not worth it.
So, I hope you enjoyed the tour of my living room.
Fondly, Tami
I'm linking to:
Funky Junk Interiors
That DIY Party
Confessions of a Plate Addict
A Stroll Thru Life
Savvy Southern Style
Feathered Nest Friday
Rooted in Thyme
Posted by Howsewears at 10:26 PM 3 comments: Links to this post

This is just a quick post to show you my new tag designs in my Etsy shop. I'll be showing you some projects in the next few days. Fondly, Tami 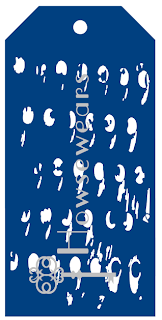 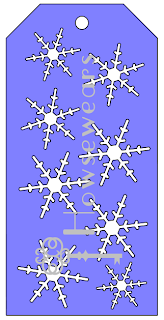 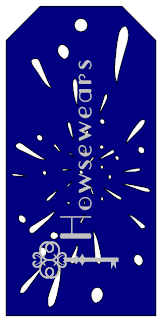 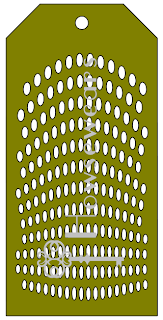 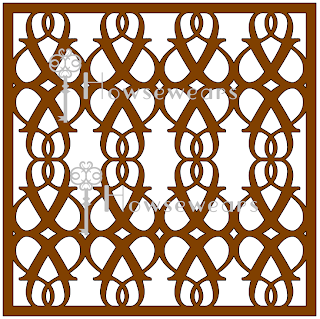 Posted by Howsewears at 9:24 AM 4 comments: Links to this post 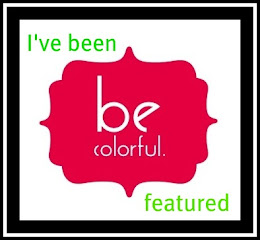 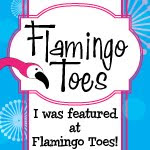